Every week on First Sight Saturday I welcome an author to share an excerpt of a first meeting between two characters. This week, I’m pleased to welcome Alison Henderson with her contemporary romantic suspense called Unwritten Rules. Alison is a woman of many talents: she also designed the leggy cover! 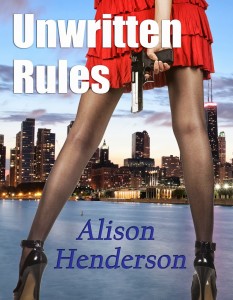 Setup of scene: This is the opening scene in the book. Ex-CIA agent-turned-thriller-author Carter Devlin and his publicist have arrived at the offices of Madelyn Li’s bodyguard agency.
EXCERPT:
“We want the best, Ms. Li. We want you.”
The earnest little man facing her across the desk had thinning hair the color of faded copper, a big walrus mustache, and the expression of a cheerful bloodhound. His upright posture added a jaunty air of confidence, as well as an extra inch or two of height.
Despite her visitor’s singular appearance, Madelyn couldn’t resist sneaking a peek at the tall man lounging in the chair beside him. She’d nearly sloshed coffee on her favorite white shirt when hewalked into her office.
“A-hem, Ms. Li.” The smaller man interrupted her errant train of thought.
She gave herself a mental slap and quickly arranged her features in what she hoped was a warm, inviting smile. Her receptionist wouldn’t have let the men in without an appointment, so they must be potential clients. As such, she couldn’t afford to offend them. She couldn’t afford to offend anyone, for that matter. In the six months since she’d opened her personal protection agency, clients hadn’t exactly lined up outside her door. So far, she’d managed to squeak by without having to lay off any of her three employees, but if business didn’t pick up soon, she might be forced to throw in the towel and admit defeat. Defeat was not in her vocabulary.
With a big smile half-hidden by his mustache, the shorter man handed her a business card that read: Herman Perryman, Publicist, Normandy Press, New York, NY.
New York!
Madelyn studied the card a moment longer than necessary before summoning her professional smile again. “What brings you to Chicago, Mr. Perryman? Phoenix, Ltd. is a small agency. There are much larger, more established firms in New York.”
Herman gestured to the tall man on his right. “Carter insisted. He says you’re the best, and if the publisher is going to require him to have a bodyguard, it has to be you.”
His introduction gave her the excuse she’d been waiting for to direct her full attention to his companion, the man she’d been trying so hard to ignore. He was easy to look at in a rugged sort of way with short black hair beginning to curl, a scarred left brow, square jaw, and cleft chin. His was a strong face, a captivating face…a disturbingly familiar face.
When she allowed herself to meet his gaze, she tried to swallow, but the muscles in her throat constricted. It was the eyes that did it. They were a startling, deep sea blue, nature-made to suck in the unwary. The eyes of a teller of tales, a maker of promises, a seducer of innocents. They were also the eyes of her next door neighbor.
What did this man need with a bodyguard?
END OF EXCERPT
Well, Ms. Li, that is an excellent question, and question needing answered after just a few paragraphs is often the sign of a riveting read.
Link to Unwritten Rules:
Amazon: http://amzn.to/1cl6jDA
If you want to keep track of Alison Henderson, you can find her here:
Website: www.alisonhenderson.com

Alison and I welcome any comments or questions you might have. Please visit every Saturday for a fresh new first meeting!

I seem to be on a roll of life lessons from football. Both our sons play. Last week the younger son, a freshman, had his first game with his junior high team comprised of grades 7-9. Obviously the object in football is to score by getting the ball across the goal line. To do that,… END_OF_DOCUMENT_TOKEN_TO_BE_REPLACED

Every week I welcome a guest author to First Sight Saturday to share an excerpt of a first meeting between two characters. Today I’m pleased that Vicki Batman is here with an excerpt from San Diego or Bust. Vicki has very good taste in character names, as you will soon see.      Hi! I’m… END_OF_DOCUMENT_TOKEN_TO_BE_REPLACED

(If you haven’t read last week’s blog entry, Filling The Gaps, it might be a worthwhile prologue to this one. I’ve linked this entry at the end of that so you can easily find your way back.) Our son in motion. Even though the photograph is an overall disaster, I like how he is looking… END_OF_DOCUMENT_TOKEN_TO_BE_REPLACED

Every week on First Sight Saturday, a guest author shares an excerpt of a first meeting. Today I welcome author Kristy Tate with her lovely romantic mystery The Rhyme’s Library. Kristy Tate is a mother of six, but now that her children are grown she would like to start a Schnauzer farm. Unfortunately, Grendal, her lone… END_OF_DOCUMENT_TOKEN_TO_BE_REPLACED

My sons have played football since 2006. They are both in high school now, the oldest a junior playing wide receiver and corner for the varsity squad, and the younger getting ready to start his season on the junior high team. The high school program has been struggling for years but we are all sure… END_OF_DOCUMENT_TOKEN_TO_BE_REPLACED

Edie Hart visits today with her short contemporary romance One Bad Day. Any day that you have to wear a tacky costume is a bad day. Read on! BOOK BLURB: Tessa is having one seriously bad day. After agreeing to dress as a cheesy mascot at a convention for her boss, her clothes get stolen, she… END_OF_DOCUMENT_TOKEN_TO_BE_REPLACED