Chicken Corn Soup is a Pennsylvania Dutch invention. If I had to choose a favorite soup my mom makes, it would be a dead tie between Chicken Corn and Beef Vegetable. Traditionally, Chicken Corn Soup has small dumplings boiled in it that my mom calls “rivels,” but I’ve never perfected the rivel, and now try to avoid too many carbs, so a meat and vegetable soup is right where I want to be. I’ve included the optional dumpling recipe at the end.

I start with my own chicken and broth. You can always skip this step by boiling or poaching some 3-4 bone-in chicken breasts and buying 96 oz. or more canned chicken broth.

Place chicken in a large pot. Fill pot with cold water until chicken is almost covered. Add everything but the corn. Bring to a boil. Simmer for 1-1/2 hours. 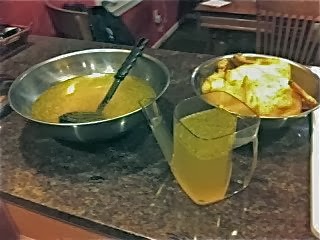 Remove chicken from broth and set aside to cool. Strain broth through a colander. At this point I use a fat separator pitcher (see photo) to remove the fat. I pour the broth from the pitcher through a fine sieve to remove smaller bits from the broth. You can also line your colander with cheesecloth if you prefer, and remove the fat by spooning from the top of the broth. Return the strained broth to the pot and add bouillon. Place pot on medium heat.

When chicken is cool enough to handle, remove the meat and cut into small bite-sized pieces. Add to the broth.

Bring to a simmer again. Add the corn and the broth until you have a ratio you like. Add the parsley, and salt and pepper to taste.

I have, in the past, added shredded carrots for color and more nutrition but it changed the taste enough that I no longer do. Still, it is a thought if you want more veggies.

If you really want some carbs, you can add cooked small pasta like ditalini or orzo, or follow the rivel recipe below.

Place flour and salt in a bowl. In a separate bowl, whisk egg and water together. Add the egg mixture to a flour and stir to combine.  Drop pea-sized pieces of the dough into simmering soup.

I hope you enjoy this tradition Pennsylvania soup!

I think a training session and license should be required before being allowed to use an immersion blender. However, I have inadvertently served this without blending it and it is still fabulous! Just like last week’s lentil soup, this is from Fresh from the Vegetarian Slow Cooker, (with the amount of cayenne reduced) so you can… END_OF_DOCUMENT_TOKEN_TO_BE_REPLACED

I’m not a vegetarian but I like to make vegetarian dishes as a way to boost my produce intake. We have subscribed to a CSA (Community Supported Agriculture) several times over the years. One of the blessings of a CSA is that it forces you to eat greens. One of the curses of a CSA… END_OF_DOCUMENT_TOKEN_TO_BE_REPLACED

Last weekend I knew my husband was REALLY looking forward to the Green Bay Packers playing the Chicago Bears, so I decided to make one of his favorite eat-in-front-of-Sunday-football meals:  chili. This can be a one-bowl dinner, though there are so many sides and snacks that go with chili that it is hard to resist… END_OF_DOCUMENT_TOKEN_TO_BE_REPLACED

In one of my earlier posts, I mentioned that I generally avoid cream-based soups. This one has no cream but is cheesy and definitely has more fat than most soups I make. I think it is worth it when you want a filling meal in one bowl or a winter lunch when you are entertaining.… END_OF_DOCUMENT_TOKEN_TO_BE_REPLACED

One of my favorite go-to soups in the winter is Split Pea. I know the mossy hue can be scary, but we should all seek the color green in our diet. Split Pea is easy, filling, healthy (lots of fiber – consider yourself warned!), can be vegetarian if you prefer, freezes well, and is inexpensive.… END_OF_DOCUMENT_TOKEN_TO_BE_REPLACED

Soup is my favorite winter food, and I’ve learned that a bowl of brothy goodness is also easy on the waistline if you avoid noodles, cream bases, and sides of cheese and crackers. One of my top ten homemade soups is Beef Vegetable because that is my mom’s bestest ever. There is no comparison between… END_OF_DOCUMENT_TOKEN_TO_BE_REPLACED